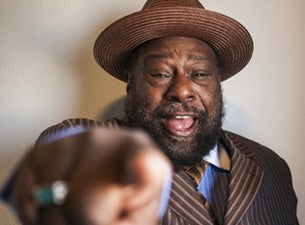 Alongside James Brown and Sly Stone, these innovators of funk revolutionized R&B during the ’70’s, twisting and mixing soul music with jazz and the influences of psychedelic rock prodigies like Jimi Hendrix and Frank Zappa.

Today Clinton is one of the most sampled musicians on the planet; he boasts alliances with Tupac, Primal Scream, The Red Hot Chili Peppers & Snoop Dog. In 2014, modern day hip hop legend Kendrick Lamar and rap veteran Ice Cube collaborated with the master on Funkadelic’s First Ya Gotta Shake the Gate.

Hits like Atomic Dog, One Nation Under a Groove, We Want the Funk, Flashlight and Mothership Connection will pump up The Palais and Max Watts like never before, with a stage show to match.