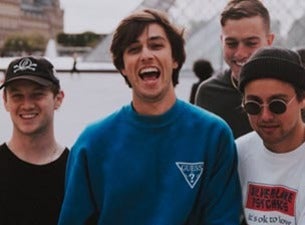 After a whirlwind few years, which has taken their music to the top of the charts and around the globe, Drax Project are without question, one of the hottest tickets in music right now.

Their recently-released self-titled debut album has dominated the airwaves and Spotify, with smash hits such as ‘Woke Up Late’ feat Hailee Steinfeld; ‘Catching Feelings’ feat. Six60; ‘All This Time’ and ‘Toto’.

While studying jazz at college in Wellington, Drax Project - Shaan Singh (vocals, saxophone), Matt Beachen (drums), Sam Thomson (bass), and Ben O’Leary (guitar) - took what they learned in class and applied it to another pursuit, making pop their own. The group gained a following after re-working vocal hooks of famous pop songs into saxophone licks. Their cover of Kimbra's track, ‘Goldmine’ went viral and caught the attention of an influential producer, giving acclaim to the newly-introduced group.

The band has performed across the globe supporting the likes of Ed Sheeran in New Zealand, Christina Aguilera on the European leg of The X Tour as well as standout performances at Rolling Stone's Coachella party.

Drax Project are an unstoppable musical force and this is a tour not to be missed!