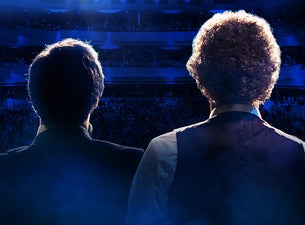 About The Simon & Garfunkel Story

PLEASE NOTE: The original artists Paul Simon & Art Garfunkel do not appear in this production.

Direct from sell out tours of the USA, UK & Europe The Simon & Garfunkel Story returns to Australia this August!

Performing to great acclaim around the world, The Simon & Garfunkel Story tells the fascinating tale of how two young boys from Queens, New York went on to become the worldâ€™s most successful music duo of all time. Starting from their humble beginnings as 50â€™s Rock n Roll duo Tom & Jerry, The Simon & Garfunkel Story takes you through all the songs and stories that shaped them, the dramatic split, their individual solo careers and ending with a stunning recreation of the legendary 1981 Central Park reunion concert.

Featuring 1960s photographs and film footage accompanied by a full band performing all their hits including Mrs Robinsonâ€™, Bridge Over Troubled Water, Homeward Bound, Scarborough Fair, The Boxer, The Sound Of Silence and many more, this is a show not to be missed by any fan of the music and era.