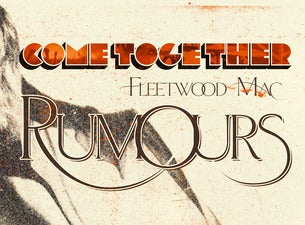 After the massive success and stellar reviews from our Come Together 2021 Album Concert Tour – (No.1 Goodbye Yellow Brick Rd, and No.2 Sticky Fingers), we announce the No.3 album of our Covid belated concert tour for Come Together 2021– Fleetwood Mac's Rumours!

Just slightly late coming in July 2022, but it will be worth the wait!

The epic line-up and absolutely killer band are Laughton Kora, Julia Deans, Mel Parsons, Dianne Swann, Brett Adams, Matthias Jordan, Jol Mulholland (MD), Alistair Deverick, and Mike Hall. Together they will perform the album in its entirety, back to back, track by track with a bonus set of Fleetwood Mac classics.

Released 45 years ago, Rumours is the eleventh studio album by Fleetwood Mac.

The album was recorded in the midst of heavy drug use and relationship break-up dramas – shaping the songs that became a cultural phenomenon.

It has received widespread acclaim from critics and has now sold over 40 million copies worldwide, making it one of the best-selling albums of all time.

In NZ it has achieved 13 x platinum sales and is sitting in the top 20 album charts 45 years after its release. Arguably every household in NZ has a copy and it is loved by both young and old.

Our Come Together band have been waiting a very long time to bring this album to our stages.

Book now, you don’t want to miss this!

Come Together brings together the best of NZ artists and musicians to collaborate and perform legendary albums in their entirety, live in concert.  Borne out of an aspiration to showcase our greatest musicians to a wider audience, these tours have already attracted well over 20,000 concertgoers.