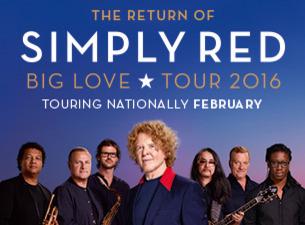 THE RETURN OF SIMPLY RED

THURSDAY, NOVEMBER 5 2015 - Thirty years after introducing a generation to the joys of soul music through their irrepressible, irresistible rendition of the Valentine Brothers’ recession-themed classic Money’s Too Tight (To Mention), SIMPLY RED are back with a world tour and a new album, ‘Big Love’.

It then moves to Napier where Simply Red are now confirmed to perform at the picturesque Mission Estate Winery on Sunday, February 28 before heading South for shows in Wellington, Queenstown and Christchurch.

This concert will be part of the new Mission Estate Summer Concert series, with another major international artist to be announced shortly to perform on Saturday, February 27 at the winery.

Tickets to the Simply Red Napier concert will go on sale at Midday, Friday November 13 through www.missionconcert.co.nz and Ticketmaster.

“I like an anniversary, and this is a big one,” says Mick Hucknall. “30 years! It's incredible. What a great thing to celebrate!”

Following a tour in Australia and New Zealand in October 2010, Simply Red finished its unbroken 25-year run with a farewell concert at London’s O2 that December. Fast-forward to 2015, and buoyed by the hugely positive response to their excellent new album ‘Big Love’ (available through Warner Music New Zealand), Simply Red will hit the road again, and in high spirits, playing all their classic hits.

Simply Red’s music has a timeless quality that has seen the band have top ten hits through the 80s, 90s and 2000’s, with album sales exceeding 60 million worldwide.

The band’s 1985 debut album ‘Picture Book’ headed into a 60s R&B groove, featuring super hits Hold Back the Years and Money’s Too Tight (To Mention). 1987’s million-selling ‘Men and Women’ went towards funk, and the vastly successful albums ‘A New Flame’ (1989) - home to If You Don’t Know Me By Now - and the hit laden ‘Stars’ (1991) found the balance between pop and soul. When Simply Red veered into contemporary dance music with the number one hit Fairground and the 1995 album ‘Life’, they imbued it with their own, unique sound.

Now, with the band entering its fourth decade, Mick Hucknall prepares to set off on one of the biggest tours of Simply Red’s career with his sense of purpose clearer than ever. “We’re called Simply Red for a reason,” says the man with one of the greatest voices in soul music. “I want to keep it simple. Our fans know who we are. They have been loyal to us. Now I’m ready to go out there and give them what they want.”

TICKETS TO THE NAPIER CONCERT ON SALE MIDDAY FRIDAY, NOVEMBER 13 THROUGH WWW.MISSIONCONCERT.CO.NZ

ALL OTHER VENUES TICKETS NOW ON SALE