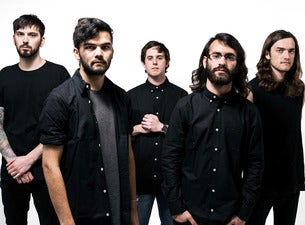 Tickets for both shows go on sale at midday this Monday, April 10.

Fans may also access a Meet & Greet Package that includes a photo with the band and more.

Mesmer, Northlane’s beautiful fourth album is a triumph – the band’s most organic yet precise album yet. It covers familiar topics but renders them in a new way, at once paying heed to the band’s heaviest roots and looking forward to an unwritten future. Recorded throughout September 2016 in New Jersey with acclaimed producer David Bendeth (Bring Me The Horizon, Paramore, A Day To Remember), this is Northlane’s defining statement. Presented directly to their fans in such an unorthodox and exciting manner, Mesmer will echo worldwide through 2017 and long beyond.

Mesmer follows on from their critically and commercially successful album Node (2015), which raced straight to the top of Australia’s ARIA Chart, debuting at #1 and landing them the ARIA Award for Best Hard Rock/Heavy Metal Album. Revered by media around the world, Node scored the coveted Feature Album on triple j, a guest host spot on iconic ABC television program Rage and two Blunt Magazine covers in six months. Alternative Press nominated Northlane for the ‘Best New Band’ award at the 2015 APMAs and they earned a third Metal Hammer Golden Gods nomination for ‘Best Breakthrough Artist’ in 2016, shaping Northlane into one of the most successful Australian heavy music exports today.

The rest of 2017 will see Northlane take Mesmer to all corners of the globe, starting with a tour of South East Asia and an appearance on Hammersonic (Indonesia). After that Northlane will return to Australia for a headline tour, before hitting international festival stages with appearances on the main stage at Download Festival (UK) and Hellfest (France). The band will also appear at Vainstream Rockfest (Germany), Jera On Air (Netherlands), Graspop (Belgium), Dissonance Festival (Italy), Rock For People (Czech Republic), Resurrection (Spain) and many more.

Pairing Northlane with In Hearts Wake promises an unmissable night for Kiwi hardcore fans, with the chance to experience music from Mesmer - the album The Music called “A bona fide masterpiece”.

“Few bands combine razor-sharp proficiency with spine-shaking heaviness and a generalised, amorphous disaffection the way Northlane do, infusing darkness, despair and (eventual) hope into an exultant musical catharsis. And four albums in, Australia’s leading metalcore lights are only getting better at it.”  **** Rolling Stone Australia

TICKETS ON SALE 10AM MONDAY APRIL 10