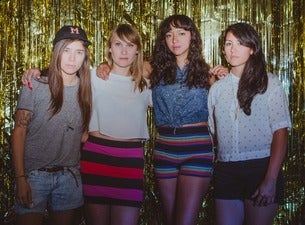 LA-based surf rockers La Luz explore the seductive underbelly of the traditionally sunny '60s genre, offering a shadowy take that transcends the style’s vintage origins. The all-girl foursome calls it "surf noir," and while there’s a melancholy current to laid-back tracks like "What Good Am I," La Luz's shows remain buoyantly light-hearted . Taking the stage in wildly patterned vintage duds, the band packs a serious live punch, keeping the energy high from start to finish and encouraging enthusiastic fans to crowd surf (this is surf rock, after all). But they don't stop there – La Luz also spurs serious moves with Soul Train-style dance contests during upbeat numbers like "Brainwash" and "You Disappear." The band's sun-soaked guitar riffs, soaring ooohs and ahhhs, and brisk drumming are a blast to rock out to, and their shows are the next best thing to a crazy fun party at the beach.

La Luz formed in Seattle in 2012 and forged a unique sound that put a noir spin on the surf rock stylings of classic favorites like The Ventures and Dick Dale. The following year they released their debut album It's Alive on Seattle-based indie label Hardly Art, drawing praise from critics for their confident songwriting and fresh approach to retro rock. The attention earned them a place on tour with acclaimed indie outfit Of Montreal, but La Luz was forced to pull out after their van slipped on black ice in Boise and their gear was destroyed. Fortunately none of them were seriously injured, and by 2014 they were back on the road opening for garage rock mainstay Ty Segall. He was so impressed by their live-wire performances that he offered to produce their sophomore album, resulting in 2015's Weirdo Shrine, an acclaimed effort that added a hearty dose Segall-inspired fuzzed-out guitar to their songs. Since then La Luz has relocated to Los Angeles, the birthplace of the surf rock sound that continues to inspire their songwriting.