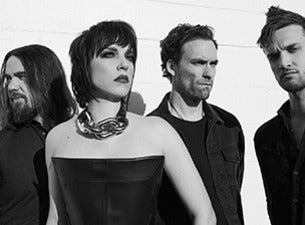 Having recently been announced for Australia’s Download Festival in 2019, Pennsylvanian hard rock powerhouse HALESTORM have today announced two festival sideshows in New Zealand – taking them to The Powerstation in Auckland on March 13 and Wellington’s San Fran on March 15.

Tickets for all shows go on sale at 3pm Thursday, September 27.

Post-grunge/metal quartet Halestorm have become one of the most successful female-fronted hard rock groups of the 21st century. With an aggressive yet hook-heavy sound that has become a fixture of American rock radio. Led by charismatic vocalist/guitarist Lzzy Hale, Halestorm have been touring relentlessly, performing hundreds of shows each year and sharing the stage with nearly all of the popular American hard rock acts of their era. In 2013, the band took out a Grammy Award for Best Hard Rock/Metal Performance for their single ‘Love Bites (So Do I)’, which appeared on their sophomore studio album, “The Strange Case Of…”. Since debuting in 2009 and their self-titled album, they’ve proven to be equally adept at delivering muscular hard rockers and piano-driven power ballads, developing a sound that over time has included elements of dance and pop-country.

Returning with their fourth studio album “Vicious” in July 2018, Halestorm have been turning heads at a mile a minute – further accentuating the pristine production techniques that peaked on 2015’s “Into The Wild Life”. Their newest release encapsulates the full scope of their talents, shifting an energy that’s brought them back down to earth. “The difference between this record and the last three is that all the emotions that were happening were all very fresh,” says frontwoman Lzzy Hale. It’s a record about empowerment, full of songs that urge the listener to be unapologetically themselves – not just being strong and taking on the storm, but how you manage to rise above it. This surging, powerful new record brings the group back into fine form – two decades into an accomplished career, Halestorm represents the results of true passion and hard work.

New Zealand – prepare yourself for two epic nights of hard rock as Halestorm return to Auckland and Wellington for the first time since their 2017 tour with Devilskin, which is expected to be nothing short of epic.