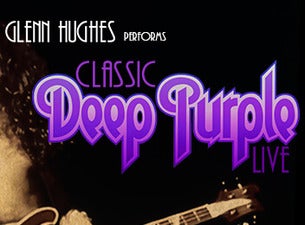 Glenn Hughes played his last concert with Deep Purple on March 15, 1976, at Liverpool's Empire Theatre. On that night, the UK bassist and vocalist walked away from one of history's truly game-changing rock phenomena and never looked back — until now.

For the first time in 40 years Australia and NZ fans will witness Glenn Hughes – The Voice of Rock and one of the finest hard rock singer/ musicians of his generation fronting a handpicked band live in concert, as he revisits some of Deep Purple's all-time greatest songs.

"Most Purple fans rank Burn and Stormbringer among the greatest albums the band ever made, in any incarnation," Glenn says. "Over that Mk III period, we were also performing Mk II classics like Smoke On the Water and Highway Star every night on massive world tours.

“I'm seriously excited to get out there and play tracks like Burn, Stormbringer You Keep On Moving, Mistreated and Getting Tighter, as well as some of those older songs that helped define the genre. With this band, I know we’re going to add up to a pretty incredible show."

Glenn was inducted into the Rock’n’ Roll Hall of Fame last year along with other Deep Purple members.

With one of the heaviest repertoires known to rock, and sound and lighting production values befitting the legend, Glenn Hughes' Classic Deep Purple shows are destined to write a new page in rock history – GET READY!

GLENN HUGHES
Deep Purple took a quantum leap when 20-year-old Glenn Hughes was seconded from British funk-rock outfit Trapeze in 1973. As bassist and co-vocalist (with David Coverdale), he helped steer the rock institution in the progressive direction of Burn and Stormbringer while touring the world for three years. His solo debut of '77, Play Me Out, preceded albums with Black Sabbath and Gary Moore. The last 25 years have seen a rush of solo work and collaborations for the ‘Voice of Rock’ including Black Country Communion with Joe Bonamassa and Jason Bonham, and high impact with the Music of Cream tour and his 2016 album, Resonate. Glenn was inducted into the Rock’n’ Roll Hall of Fame last year along with other Deep Purple members.

JEFF KOLLMAN
The hallowed name of guitar god Jeff Kollman has graced too many greatest player polls to count these last 30 years. The Ohio punk turned jazz-prog virtuoso has run rings around the world since his '90s metal band Edwin Dare gave way to prog heroes Cosmosquad and a gun-slinging resume that spans Sebastian Bach to Alan Parsons; Chad Smith's Bombastic Meatbats to UFO spin-off Mogg/Way. A classic guitarist's guitarists, Jeff takes high praise from the likes of Steve Lukather in his estimable stride. On stage and record, he's been a recurring foil for Glenn Hughes since the Songs In the Key of Rock LP of 2003.

LACHY DOLEY
Some call him the Jimi Hendrix of the Hammond organ. Glenn Hughes calls him "the greatest living keyboard player in the world." Australian soul monster Lachy Doley is a killer showman too, pumping and pounding the most astonishing sounds from the classic B3 Hammond and his uber-rare Hohner D6 Whammy Clavinet. Lachy's version of Bill Withers' Use Me has clocked millions of YouTube hits and his latest album, Lovelight, has torched blues charts from Australia to the UK. Sideman to Powderfinger, Steve Vai, Jimmy Barnes and Joe Bonamassa, the world-touring keys prodigy cemented his place in Glenn's band during sessions in Copenhagen for the Resonate LP.

PONTUS ENGBORG
Hard-hitting funk-rock drummer Pontus Engborg barrelled out of Sweden to hit the LA session scene barely out of his teens in 2000. A fast and furious apprenticeship from the Viper Room to the Whiskey and the Knitting Factory would lead to stints with Joe Lynn Turner, Graham Bonnet, Toto's Bobby Kimball and Journey's Steve Augeri. Back in Sweden, he's been the man behind the supremely versatile Confusion since 2007. It was there that he came to the attention of Glenn Hughes in 2010, and made his debut behind the Voice of Rock in Serbia that July, sans rehearsal or soundcheck, in front of 21,000 people. Seven years later, it’s fair to say he passed the audition.