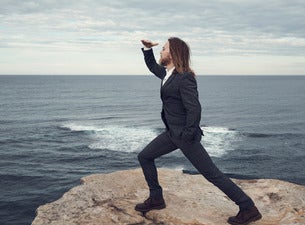 Inimitable poly-talent, Tim Minchin, will perform his new album, Apart Together, in it's entirety- in a one-off concert from Sydney’s iconic Trackdown Studios to be streamed at 9pm NZDT on November 19th, to celebrate the record’s general release.

Featuring extraordinary guest musicians, 11 songs, and whatever pours out of Minchin’s brain in between, the concert will be available online for just 48 hours, and will only be accessible to ticket holders.

Tim says: “I’ve been thinking a lot about how to make live entertainment in this no-live-entertainment world, and - as always - how to make a virtue of the restrictions placed on us as artists. And I’ve concluded that we have a fantastic opportunity to make a new style of “live” concerts. Not like the old model, where cameras are inserted into seats in an audience, or put on the shoulder of a camera operator dressed in black, skulking around the edges of the stage, pretending they don’t exist. But instead, I want to bring the audience into the room with us. I want the viewer to feel like they have been invited into the studio to watch the final dress rehearsal for a concert, and have been given permission to stand in amongst the band, to sit down next to me (ewww), to be completely inside the experience. This album we’ve made really lends itself to this sort of performance: the songs tell stories that ask the listener to stay engaged with every lyric; they are generally very personal; they vary in style from proper all-out rock-pop tracks to seriously intimate ballads. I really hope people settle in with a really good set of speakers, a really good friend or two, and a really nice bottle of wine, and let me see if I can’t give them an online performance that isn’t quite like anything they’ve ever seen. Oh. That sounds like porn doesn’t it. *It’s not porn”.

Tim will also be raising money in support of Ausmusic T-Shirt Day during the stream, with all proceeds going to music industry charity, Support Act. To donate go to: ausmusictshirtday.org.au

Apart Together ...is full of gravity-defying balladry and beautifully observed moments

“If there’s an artist more naturally disposed to a hybrid of pop and orchestration, I do not know his name” - The Age, Melbourne

“Minchin is a genuine musical virtuoso”

“His songs are jaunty or bittersweet or dark, but always fiendishly clever.”

“an LP’s worth of bangers, fizzing with his trademark acid one-liners, plus a goodly helping of more reflective ballads too.”

‘Apart Together’... is a determinedly auto-biographical effort that has finally given him peace with his own voice, musically and metaphorically.