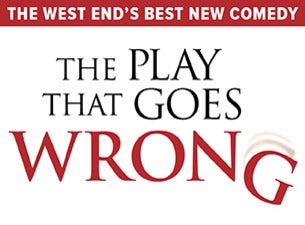 The Play That Goes Wrong Tickets

About The Play That Goes Wrong

Winner of Best New Comedy at London's 2015 Olivier Awards and acclaimed with five star reviews, The Play That Goes Wrong is currently playing to packed houses in the West End and Broadway and is set to open in New Zealand in September.

The Cornley Polytechnic Drama Society are putting on a 1920s murder mystery, but as the title suggests, everything that can go wrong...does! The accident-prone thespians battle on against all the odds to get to their final curtain call with hilarious consequences!

THE PLAY THAT GOES WRONG is guaranteed to leave you aching with laughter!

‘★★★★★ I FEARED I WAS GOING TO HYPERVENTILATE’ THE DAILY MAIL, UK

‘WE LAUGHED UNTIL THE TEARS RAN DOWN OUR FACES’ JOANNA LUMLEY