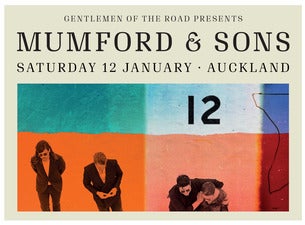 Secret Sounds and Gentlemen of the Road Present

In celebration of the highly anticipated November release of their fourth studio album Delta, English folk conquerors MUMFORD & SONS today announced details of a massive 60 date world tour which will include a very special one day event in Auckland this Summer – their first New Zealand show since 2015!

Over 800,000 tickets will go on sale next week for the world-wide Delta Tour, heralding the band’s biggest tour since forming ten years ago.

In a mammoth one day, festival style show, Gentlemen of the Road comes to Auckland, where hosts Mumford & Sons will be joined by special guests Leon Bridges, Michael Kiwanuka and Sam Fender (with other artists soon to be announced) and will perform on The Outer Fields at Western Springs on Saturday, January 12, 2019. Mumford & Sons themselves curate the day’s entertainment with a strong emphasis on celebrating the diverse businesses, culture and community of the city or town that welcomes them.

Introduced by the frenetic, persistent rhythms of first single ‘Guiding Light’, it’s a wildly experimental record that effortlessly marries the intimacy and jubilance of the band’s first two records, with the scope and stadium-sized dynamics of 2015’s Wilder Mind.

Delta was produced by Paul Epworth (Adele, U2, London Grammar) in London.

Leon Bridges, the young Fort Worth R&B artist who last performed in New Zealand in January 2016 is touring in support of his latest RIANZ Top 20 album Good Thing (released in May through Sony Music) featuring current single ‘Beyond’.

By now Leon’s backstory is well known; he went from working as a dishwasher and struggling through the open mic scene in his home town to two-time Grammy nominated artist performing at the White House for President Obama, attending the Met Gala and appearing on Saturday Night Live in a two-year span.

Good Thing marks the beginning of another transition for Leon Bridges. If Coming Home anointed him the R&B underdog whose sound was reminiscent of days past, Good Thing is an album firmly rooted in the modern world, with nods to R&B’s storied and varied history.

Michael Kiwanuka signaled his arrival as one of the UK’s most distinctive new voices in 2012 with his vintage soul imbued debut album, Home Again.  It was a voice that sounded both rich and timeless, and the young Londoner received widespread critical acclaim. 2016’s Love & Hate LP was a different beast entirely, produced by Danger Mouse it was one of the year’s great peerless records and picked up support across the globe, earning Michael his first number 1 album in the UK, and his first Brit Award nominations too.  Having toured the globe alongside a very special collection of musicians, Michael Kiwanuka is a true artist of distinction, and with the best almost certainly yet to come.

Sam Fender, rising British singer-songwriter and nominated BBC Sound of 2018 artist has been praised for his latest raw and poetic track ‘Dead Boys’, lifted from his forthcoming debut EP. Fender’s lyrics reflect issues both pertinent and pressing, on political and social issues.

Sam embarks on a UK headline tour this October/November before this his debut performance in New Zealand.

Stay tuned for a second announcement of further artists to join the lineup soon!