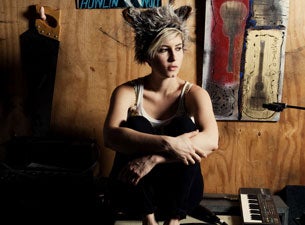 9 Events
Loaded 9 out of 9 events
Back to Top

After a sell-out tour of Australia, singer-songwriter Missy Higgins will head to Auckland for her first New Zealand show in five years.  Missy and her Nashville based band will perform at new venue, The Rangatira Room at the Q Theatre, 305 Queen Street on Tuesday, August 7.

'The Ol' Razzle Dazzle' Tour comes after Missy's return to music following her private decision to quit, and is the first chance fans will have to hear Missy perform songs from her much anticipated new album 'The Ol' Razzle Dazzle'. Missy has sold over a million copies of her first two albums, 'The Sound of White' and 'On A Clear Night' which were released to much critical acclaim, and earned Missy multiple ARIA Awards.

"I've always absolutely loved New Zealand so I'm so happy to be finally playing a show here again, it's been too long! I'll be bringing over my Nashville band especially too so it should be a really special show" said Missy.

A few weeks ago, Missy released 'Unashamed Desire', her first single in five years, to praise from both fans and critics. The clip for 'Unashamed Desire' (http://missyhiggins.com/2012/04/unashamed-desire/) was directed by the ARIA Award winning Natasha Pincus, whose name has become synonymous with Gotye's 'Somebody That I Used To Know' clip which she also directed.

'The Ol' Razzle Dazzle', which was recorded in Nashville and co-produced by Butterfly Boucher and Brad Jones, will be released on June 1.