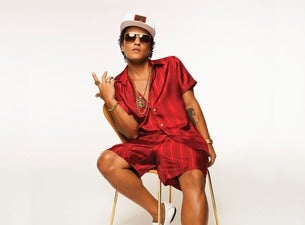 The ‘Uptown Funk’ superstar sold out arenas across Australia in 2014 and fans have been begging for his return ever since. With countless accolades including five Grammy Awards, being named #1 on Forbes list of top 30 people under 30 and an ARIA #1, Live Nation is thrilled to bring the pop/soul/funk maestro to Auckland.

Currently touring through Europe and the UK (ahead of an extensive trek across North America), London’s The Evening Standard bestowed a 5-star review on Mars’ O2 Arena shows exclaiming:

“One of the greatest showmen in pop music right now”

“Only Uptown Funk, his biggest hit to date, could polish off what was a thrilling masterclass in showmanship from a sensational performer.”

A multiple GRAMMY® Award winner and 20 time GRAMMY® nominee, Bruno Mars has sold over 170 million singles worldwide and over 26 million albums worldwide, affirming him one of the best-selling artists of all time. The critically acclaimed singer, songwriter, producer, director, musician recently dominated charts with the worldwide smash single, “Uptown Funk.” The RIAA diamond certified smash made history as the longest-leading Billboard “Hot 100” single of the 2010s, and is only the 10th single in the chart’s 57-year history to spend at least 14 weeks at #1. “Uptown Funk” has received a number of honors, among them three 2016 GRAMMY® Awards, including the coveted “Record of the Year” award. In addition, the “Uptown Funk” companion video received the 2016 MTV Video Music Award for “Best Male Video.”

Mars returned to the Super Bowl Halftime stage this past February to perform alongside Beyoncé and Coldplay. Mars’ historic 2014 performance made NFL history as the second most watched Super Bowl Halftime Show ever, earning a record-breaking total viewership of over 115.3 million, all while being the youngest artist ever to serve as the sole Super Bowl Halftime headliner. According to Billboard, Mars scored his first five “Hot 100” #1 singles faster than any male artist since Elvis Presley. As a singer, songwriter and producer, Bruno Mars has now massed an incredible catalog of 35 “Hot 100” hits to date.

Renowned for his electrifying on stage retro showmanship, don’t miss this opportunity to experience one of the greatest singer-songwriters of all time. Don’t believe me? Just watch.