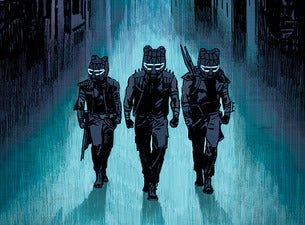 Black Tiger Sex Machine cuts an unmistakable profile. There are the masks, for one thing: sleek, stylized feline heads emblazoned with LED eyes glowing white and red. On stage, they seem to float in the darkness, bobbing in time with their slow-motion dubstep beats. The masks are the ultimate proof of the way the Montreal trio has managed to create an entire universe around its menacing brand of bass music. A BTSM concert isn't just a show — it's an adventure in sci-fi world-building.

BTSM — Marc Chagnon, Julien Maranda, and Patrick Barry — got their start in 2011 with the ‘Drama' EP, a slinky fusion of electro house and filter disco, but their music soon turned darker. The ‘Studs, Spikes & Blood' EP from 2012 introduced hints of acid and warehouse rave, and by 2015's "Religion," the group's sound throbbed over lurching dubstep rhythms.

All the while, their live shows were making them a force to be reckoned with, taking them to Electric Forest, Lollapalooza, TomorrowWorld, and other influential electronic music festivals around the globe. In 2016, they put out their debut album ‘Welcome to Our Church' on their own Kannibalen label, their longtime headquarters. They followed that with ‘New Worlds' in 2018, fleshing out a long-running narrative of a zombie apocalypse in songs like "Replicants" and "Artificial Intelligence."

Their masks, fashioned by Montreal industrial designer Gabriel Hebert, place them in the ranks of Daft Punk and deadmau5 — artists with a keen grasp of compelling visual communications. Their live shows are just as spectacular, incorporating MIDI controllers with CDJs and live electronic drum pads.

As BTSM fans (dubbed "the Church") can attest, the group's concerts are enveloping affairs. They may be hard to tear your gaze away from, but the real action is in the heaving, head-banging crowd, where the trio's apocalyptic beats land like the zombie gospel.