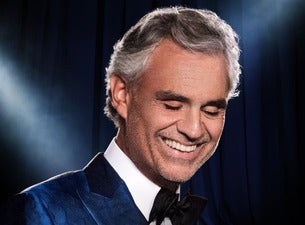 Shouts of "Forza Italia!" and "Andrea, we love you!" will fill the air when Italian singing superstar Andrea Bocelli hits the stage to deliver a moving evening of operatic magnificence and lush, romantic pop. Expect to hear romantic opera selections from Puccini's Tosca, Verdi's La Traviata and Donizetti's Lucia di Lammermoor alongside Broadway hits, Neapolitan standards like "Funiculì Funiculà," and Nino Rota's love theme from The Godfather. Bocelli also takes audiences back to the early piano-bar days of his legendary career via songs from 2018's Si, his first album of new material in 14 years. The tenor's onstage entourage includes special guests from the worlds of dance, classical music, opera and Broadway. And if he doesn't do a lot of onstage talking, that's because his fiercely emotional music says it all.

According to no less an authority than Celine Dion, "If God would have a singing voice, he must sound a lot like Andrea Bocelli." Born in the Tuscan village of La Sterza in 1958, the blind tenor won his first song competition at age 14. He has subsequently released 19 albums that have sold more than 19 million copies altogether. He has won countless awards for both his opera and pop efforts and is the very definition of a crossover success.

Bocelli's studio work has included albums devoted to Giuseppe Verdi, Mediterranean love songs, sacred arias and cinematic works. He has recorded live albums in Las Vegas, Tuscany and New York City's Central Park. In 2018, he released Si, an album of songs the golden-voiced singer describes as a "celebration of love, family, faith and hope." Bocelli's first album of new material in 14 years was recorded with rock producer Bob Ezrin and includes guest appearances from pop phenomenon Ed Sheerhan, opera soprano Aida Garifullina and his sons Matteo and Amos. It went to the top of the albums chart and has been Bocelli's most successful release in a decade.