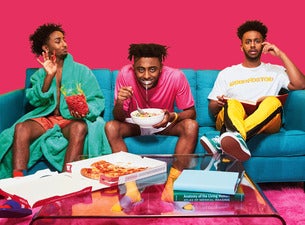 When you think of Portland, Oregon you don’t think hip-hop. AMINÉ is changing that. The young virtuoso is set to bring the tour to Auckland this April.

Tickets for all shows go on sale at 9am Friday, February 9.

Aminé, pronounced ‘uh-MEE-nay’, does not fit the blueprint of a rapper in 2018 – he is upbeat, relentlessly positive and mischievously fun. Certified part of the XXL Freshmen class of 2017, he holds his own in an era of seemingly gloom inspired, misanthropic smorgasbord of trap/ hip-hop artists.

Sharpening his blade against the likes of Kanye West, Tupac and André 3000’s back catalogues, Adam Aminé Daniel attributes equal influence from his parents’ Ethiopian heritage and the discovery of hip-hop.

“My parents always played African music and Bob Marley. Then, I grew up on everything from Erykah Badu to John Mayer. I want to do something that reflects this diversity. My songs need to be good for the listener personally.”

High school was spent fine turning his art. Releasing his first aptly named mix-tape, Odyssey To Me, in 2014, Aminé has gone from strength to strength within the underground hip-hop community gaining respect from fans and musicians with his refreshing, positive style.

It wasn’t until the release of the razor-sharp, three-time platinum track Caroline from the debut, Good For You (2017) that industry heads started nodding along to what the underground knew all along. The 23-year old’s effortlessly cool, jaunty persona was captured perfectly in the self-directed music video for the single. The track drumming up a cool 210 million plus views, 300 million-plus Spotify streams, 81 million-plus Soundcloud plays, as well as reaching #1 on Spotify’s Global Viral Top 50.

This is just the beginning for Aminé and he’s not ready to settle - “I never want a basic reaction. I want you to always have questions. I hope to challenge listeners to wonder why”.

Catch this hip-hop juggernaut this May!