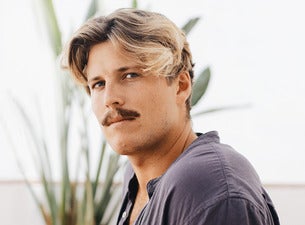 Ziggy Alberts is a singer-songwriter who gives new meaning to the term independent artist. At only 24 years old he has released five records, started his own label Commonfolk Records, played sold out tours across the world, and his music has effortlessly amassed millions of listeners worldwide. Musically Ziggy’s folk-hewn sound has raised comparisons to the likes of early Ben Howard or Jack Johnson. Like these contemporaries, Ziggy creates honest and personal music that explore his relationships both with others and the planet – a subject close to Ziggy’s heart as a surfer and environmental enthusiast.

In 2018, Ziggy released his fifth record ‘Laps Around The Sun’ which was premiered on Billboard Magazine and was ‘Feature Album of the Week’ on triple j.

His energetic performances and open-hearted conversations on stage in-between ballads, Ziggy masterfully evokes a feeling of connection that ripples throughout the crowd and keeps everyone wanting more. Expect your night to be a blend of dancing, sing-a-longs, and unplugged favourites; Ziggy will have the crowd bouncing one moment to silently swaying the next.