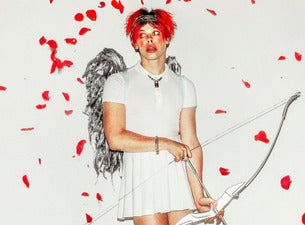 Live Nation and Secret Sounds have today announced that YUNGBLUD will bring his huge Life on Mars tour to Aotearoa in 2022. The Yorkshire born singer, songwriter and multi-instrumentalist will perform an all ages-show at Auckland’s Shed 10 on July 20th, 2022, with tickets on sale from 12pm this Friday.

YUNGBLUD has torn up stages over the ditch in Australia including Splendour in the Grass, Spinoff and Falls Festival, but 2022 will mark his first performance to a Kiwi crowd. The past two years have seen YUNGBLUD collaborate with a host of heavyweight artists, including Halsey and Travis Barker for 11 Minutes, and with Machine Gun Kelly and Travis Barker for I Think I’m Okay.

Now with Cotton Candy sitting at more than 1.5 billion streams and 800,000+ albums sold globally, there’s no doubt that YUNGBLUD’s star is continuing to rise both in New Zealand and around the world.

“I’m so excited to perform in front of a New Zealand crowd and to meet my Kiwi fans for the first time. I’m sitting on a lot of pent-up energy, emotion, and passion so you all better prepare yourselves. I’ve had a year trapped in a room and my ADHD needs to have some gasoline put on it and set me on fire…let’s get it!” said YUNGBLUD.

YUNGBLUD’s sophomore album ‘Weird’, released in December 2020 and described as a coming-of-age album, is available now.

Tickets for go on sale at 12pm Friday November 12.