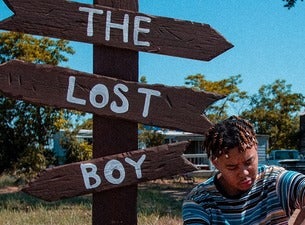 Raised in Maryland, the now Los Angeles-based MC is a consummate 21st century storyteller, affirmed not only by his 200 million+ streams and collaborations with Anderson .Paak, Dr Dre and Chance the Rapper but countless features, including XXL magazine’s cover star of their 2019 ‘Freshman Class’. Recognising, respecting, and revering the verbal potential for unity, his acrobatic raps, cinematic wordplay, and nimble rhymes have garnered him praise and attracted fans all over the world.

On his full-length debut, “The Lost Boy” [out via Warner Music New Zealand/Atlantic Records], he employs the full power of language. After teasing the project with the cathedral-size raps ‘Have Mercy,’ which amassed 25 million Spotify streams, and his single ‘Bad Idea’, which featured Chance the Rapper [feat. Chance the Rapper], he unleashed the follow-up ‘RNP’ [feat. Anderson Paak] with production by J. Cole – setting the stage for a major mainstream breakthrough in 2019.