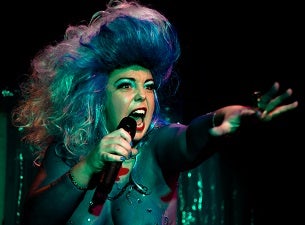 Life is a one-woman show for risqué rabble rouser Yana Alana, who lets it all hang out. Literally.

The edgy alter ego of Sarah Ward delves into deep and dark places of burlesque and blame in her show Between the Cracks.

After time in rehab, Yana Alana unapologetically returns to bare all through song, poetry and her own style of dance.

Her laugh-out-loud performance has been described by the Sydney Festival as “cabaret at its very best – incisive, hilarious, confronting and, most of all, musically divine”.

A mistress of emotional manipulation, the woman in blue invites you to view the world from the heart and mind of a fragile and courageous diva. Imagine Liza Minnelli as a Smurf with an addiction problem.

Between the Cracks is on for two nights only.

To the point: A risque show of confronting fun/ musically divine/ cabaret, courage and craziness.