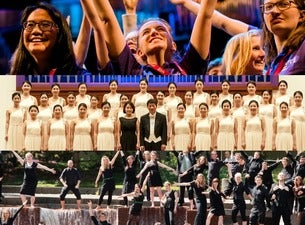 About World Symposium on Choral Music

For one glorious week, Tāmaki Makaurau will be alive with concerts, awash with international delegates and teeming with music lovers. Twenty five of the world’s best choirs, over 40 distinguished speakers on choral music and thousands of delegates will descend on Auckland 11-18 July 2020 for the 12th World Symposium on Choral Music (WSCM2020). One of the most anticipated events on the international choral calendar, the Symposium is a major international choral music festival which also serves as a triennial global choral congress.

To enable choral fans to experience these world-class choirs, limited public tickets are available for the Symposium concerts at the Auckland Town Hall. Each concert will feature three choirs, in a varied programme of entertaining and exciting choral music.

Recognised as “one of the jewels in the choral crown of New Zealand” by Kiwi composer David Hamilton, the New Zealand Youth Choir holds a reputation for consistency, energy and excellence. Their performance at WSCM2020, led by conductor David Squire, follows the group’s recent tour around the islands of the South Pacific and will include a diverse and fascinating selection of traditional Māori and Pasifika music.

Shenzhen Lily Choir is regarded as an ensemble of national excellence in China. Conducted by Hu Manxue, this much-awarded children’s choir is clear, bright, warm and colourful in performance. Its members are 11 to 17-year-old students of Shenzhen Senior High School and their programme includes both traditional and contemporary Chinese choral music. “The performance was stunning, and represents the highest possible level of choral performance.” – Tim Sharp (ACDA, Executive Director)

The professional Houston Chamber Choir is dedicated to the awareness and appreciation of choral music and musicians. Winner of Chorus America's 2018 Margaret Hillis Award for Choral Excellence, the choir has been described by Tallis Scholars founder Peter Phillips as “one of the country’s leading ensembles". As if to illustrate this, in January 2020 Houston won a GRAMMY Award for Best Choral Performance for its album, ‘Duruflé: Complete Choral Works’.

Choristers from the widely diverse countries of Estonia, Kenya and Canada will enchant audiences in an evening dedicated to people and the land they call home.

Collegium Musicale has gained recognition as a choir that gives exceptional performances of both early music and works by Estonian composers. From a country renowned for the excellence of its choral singing, and under the direction of chief conductor Endrik Üksvärav, Collegium Musicale performs as many as forty concerts a year, both locally and internationally, and has won numerous gold medals and prizes. Their programme includes Veljo Tormis’ ‘Forgotten Peoples’, Arvo Pa¨rt’s ‘And I Heard a Voice…’ and Erkki-Sven Tu¨u¨r’s ‘Gloria’ from Missa Brevis.

The Nairobi Chamber Chorus, led by Ken Wakia, introduces young Kenyans to high-quality musical forums from which they can build their careers, and many alumni are now leading musicians, performing and teaching across Kenya and beyond. Their concert programme will include traditional folk music from the Luo community of Western Kenya and a special performance of ‘Pokarekare Ana’.

Xara Choral Theatre is Canada's leading creator of narrative-based choral theatre performances. The ensemble, founded by Artistic Director Christina Murray and a team of four other women, gives life to sung stories that are heartfelt explorations of identity, community, and culture, as well as a feast for the senses. Xara’s WSCM2020 programme consists of two theatrical works by Murray and indigenous contemporary dancer Sarain Fox: Fatty Legs and Rings Through Water.

This concert showcases some of the best choral voices from the far-flung lands of Norway, Mexico and Switzerland.

Under the baton of Eirik Sørborg, the Norwegian National Youth Choir will perform in collaboration with professional a cappella ensemble Nordic Voices. The concert places Norway’s top youth choristers alongside a world-renowned professional sextet that is fêted for its artistry, versatility and technical precision. Their programme unites traditional Norwegian folk songs with such contemporary masterpieces as Lasse Thoresen’s ‘Impatient Bride’ and Frank Havrøy’s ‘My mother the earth’, as well as classics by Arnold Scho¨nberg and, of course, Edvard Grieg.

Founded in 1990 by its director José Galván Castañeda, the lively a cappella vocal ensemble Voz en Punto celebrates Mexico’s rich musical heritage through song.  With a repertoire including popular, early, and contemporary music, the sextet has performed in all of Mexico’s principal concert venues and has been invited to perform with other top international vocalists, such as Bobby McFerrin and The King’s Singers, as well as with several notable orchestras.

Zürich Singing Academy is a professional chamber choir that champions Swiss composers through the group’s distinctive sound and fine musicianship. Conducted by Florian Helgath, the Zürcher Sing-Akademie regularly performs both a cappella programmes and concert projects with small instrumental ensembles. As famed Belgian singer and conductor René Jacobs comments, “There is a great ensemble quality about this choir, which is so fully dedicated to making beautiful music together.”

A concert of huge skill and variety presented by a renowned German male ensemble, a classy mixed-voice choir from Japan and an Aussie children’s phenomenon.

The multi-award-winning men’s chamber choir Ensemble Vocapella Limburg from Germany is known internationally for its wholehearted commitment to men’s choral literature. Led by Tristan Meister, the ensemble has built up an excellent reputation and is frequently invited to give concerts at home and abroad. “Here a choir moved at the highest level of interpretation, here the singers of each voice [part] could seamlessly join the great choirs of Stuttgart – and that means something in this choir-rich [city]!” (Stuttgart-Obertürkheim, concert review)

The singers of Gondwana are drawn from the remarkable Australian choral phenomenon that is Gondwana Choirs. Gondwana features indigenous singers of Far North Queensland, children of farming families from Western Australia and young people from city communities, all coming together under the masterful direction of Lyn Williams to create unique choral performances that embody the cultural diversity of Australia.

Their programme includes ‘Barrabula Barra Ma’ (Bennelong arr Williams), Luke Byrne’s ‘Birinyi’ and ‘Storm Bird’, Dan Walker’s ‘Moments that Shaped Australia’ and ‘Port Arthur’, WSCM2020 presenter Paul Stanhope’s ‘The Acrobat’ and ‘This is our home’ from Jandamarra: Sing for the Country, and Kate Miller-Heidke’s famous ‘Our Song’, alongside traditional songs of the Torres Strait Islands.

Led by artistic director Kazuhiro Fukunaga, the Japanese ensemble harmonia ensemble is, according to singer and lecturer Kazuo Mori, “full of creative energy beyond any genre, yet they hit points and styles precisely”. The choir’s high-quality sound and artistry have resulted in numerous international performances and top awards at both the 63rd and 64th Japanese National Choral Competition, as well as the 40th Florilège Vocal de Tours in France.

A delightful mix of choirs – from Britain, South Korea and the USA – shares this exciting concert.

The National Youth Choir of Great Britain was founded in 1983 as a single choir for the best young singers in the nation. Today, the ensemble is conducted by Ben Parry and is the flagship ensemble of an Arts Council England National Portfolio youth music organisation. Praised for its “rhythmic alertness, fresh tone, and verbal clarity” by Bachtrack, the choir offers innovative programming and performances. Their WSCM2020 programme will include works by Ben Parry, Paul Stanhope, and Kerry Andrew, among others.

Ewha Chamber Choir, led by Shin Hwa Park, consists of current and past students from the College of Music at Ewha Women’s University and is considered one of the finest female choral ensembles in South Korea. Renowned for its exquisite sound, the ensemble is invited to perform at many prestigious events and has produced twenty recordings, which are regularly broadcast on top local radio stations. Their programme will include ‘Mountain Flowers’ by Jung Sun Park and ‘Blessed Land’ by Ji Poon Park.

Portland State Chamber Choir, directed by Ethan Sperry, is the top choral ensemble at Portland State. Founded in 1975, the choir has performed and competed in venues across the US and around the world, earning over 30 medals and awards in international competition, and is considered “amongst the finest choirs in the world” (Classics Today).

Their WSCM2020 programmes are ‘Legends of Rebirth from Nature’ and ‘The Sun from Earth and the Earth from Space’, which features arrangements by Sperry himself.

The Idea of North

A superb Californian children’s choir, a celebrated men’s choir from Taiwan and a stylish German vocal jazz ensemble will make for a concert of wonderful variety.

The Müller Chamber Choir, a 30-strong male ensemble, is one of Taiwan’s most prestigious choral groups. Led by the respected Meng-Hsien Peng, the Müller Choir will present works in three parts, as a response to the theme of WSCM2020: ‘People and Universal Awareness’, ‘People and Love for the Land’, and ‘Wish for the World: People and the Land’. Their repertoire will feature Richard Strauss’s ‘Traumlicht’ and Bob Chilcott’s ‘We are’, among other notable works.

The Cantabile Youth Singers of Silicon Valley is a comprehensive choral music education and performance programme for children and teens, who are trained to engage their hearts and minds, and brought into a lifetime’s appreciation of the arts, diverse cultures and languages. ACDA Executive DirectorTim Sharp comments, “I have been a part of their performances, and their work is simply stunning”. Under the inspired direction of Elena Sharkova and Jace Wittig, the choir’s programme includes work by Joan Szymko, David Brunner and Valery Gavrilin, among others.

“Pop-up combines an outright joy in music-making and a lively, relaxed stage presence with brilliance of sound and a high degree of technical perfection.” (Georg Grün, conductor)

Enjoy the superb and varied choral skills of world-leading ensembles from Sweden, Indonesia and Indiana!

Featuring 30 students from the Indiana University Jacobs School of Music, NOTUS is one of the USA’s most distinctive collegiate vocal ensembles, with a singular commitment to championing living composers through commissioning, programming, and recording new works. Directed by conductor-composer Dominick DiOrio, the ensemble has performed across the USA, from regional and national ACDA conferences to Carnegie Hall.

“The sound of the ensemble is mature and assured, even as it navigates a thorny array of styles, characters, and vocal demands.” (David Rents, Choral Journal album review 2018)

NOTUS will sing music by vibrant living composers for an ‘America in progress’, including the world première of “What is Outs” by Katherine Bodor and “Father Black Robe” by John Griffith.

Since its founding in 1989, Stockholms Musikgymnasiums Kammarkör has achieved great success, with many competition awards and regular invitations to participate in masterclasses and international conventions. Directed by Helene Stureborg since 2002, the choir has toured often and garnered prizes and placings at numerous competitions across Scandinavia and Europe. Their program includes a newly commissioned work by Ma°rten Jansson, Swedish folk tunes and much more.

Founded in 1996 by conductor Avip Priatna, Batavia Madrigal Singers is one of the finest vocal ensembles in Indonesia. The choir’s repertoire spans the classical, popular, baroque, modern, contemporary, secular and sacred genres, as well as beautifully-choreographed Indonesian traditional folk songs. The choir has achieved accolades and awards at more than thirty major choral events.

A captivating concert, comprising one of the world’s most acclaimed chamber choirs and a magnificent children’s choir in a choreographed performance.

Celebrating 44 years of choral singing, Hamilton Children’s Choir dazzles audiences with a flexible and focused choral tone, masterful interpretations of challenging repertoire, and a captivating, authentic stage presence. Under the artistic direction of internationally-acclaimed Zimfira Poloz, Hamilton Children’s Choir is dedicated to exploring fresh approaches to choral music that reduce barriers, strengthen the choral artform and demonstrate that ‘excellence has no age’.