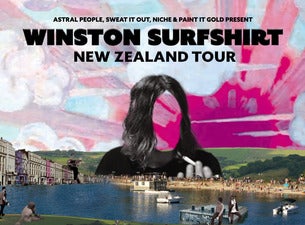 Following the buttery hip-hop toned release of “For The Record” in late 2018, the band now pay homage to their roots: their raucous live shows. Launching at Sydney’s Enmore Theatre on Friday, May 31, the band visit Newcastle’s Cambridge Hotel on Monday, June 1, followed by Melbourne’s UOW Bandroom on Friday, June 7 and The Forum on Friday, June 14. The following week on Friday, June 21, the six-piece land at Adelaide’s HQ before crossing to Perth’s Metropolis on Saturday, June 22. A tour finale occurs on Friday, June 28 at Tivoli in Brisbane’s Fortitude Valley.

Winston Surfshirt have built a cult following off the back of their live shows, with their loved and unique versatility on stage seeing them play to sold-out crowds at home and abroad. They sold out all 10 shows across the country on their Australian Sponge Cake tour, followed by festival billings at Splendour In The Grass, Spilt Milk, Falls Festival, Field Day & This That, before heading overseas and selling out shows across London and Europe.

With more new music to follow - don’t delay on witnessing Winston Surfshirt performing their favourites, past, present and future, on their biggest headline tour to date.