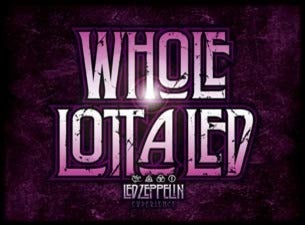 For lovers of the mighty Led Zeppelin, New Zealand’s very own “Whole Lotta Led’ will be rocking the Wellington Opera House on Sat 3rd October 2020.

We invite you to join us as we celebrate the 50th Anniversary of the legendary album Led Zeppelin III.

Come relive this legendary album and revel in an evening of the finest music from the greatest rock and roll band ever!

In tribute to the spirit and legend of the mighty Led Zeppelin, Whole Lotta Led have been consistently delivering an authentic Led Zep experience since 2007.

Do not miss this chance to catch the show in a theatrical setting in one of Wellingtons finest venues, where this classic contrast of stadium rock and pastoral folk simply shine.

Led Zeppelin III encapsulated the dawn of the 70s. Refining the preeminent group’s super-swagger bombastic flare against the acoustic roots of the blues and and folk music. The first half of the show will be devoted to this album, and thereafter will be a Whole Lotta your favourite Led Zep songs ringing into the night.