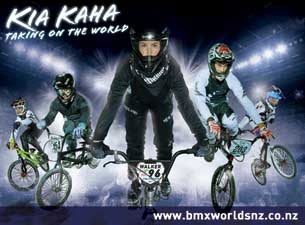 New Zealand will play host to the world's best BMX riders in July.

For the first time, the UCI BMX World Championships will be staged in this country, to be held in the spectacular surrounds of the Vector Arena on the Auckland waterfront from 24-28 July.

New Zealand will boast an overall team of more than 800 for the Challenge (age group) classes on Wednesday 24 and Thursday 25 July and the Elite World Championships on Saturday 27 and Sunday 18 July.

The best will be heading to Auckland and none bigger than the great Maris Strombergs from Latvia. The four-time World Champion has won the gold medal on both occasions that BMX has been an Olympic sport – in Beijing in 2008 and last year in London.