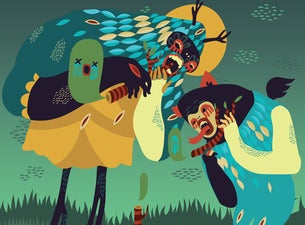 British power trio TTNG brings math rock to the masses every time they perform their technically jaw-dropping jams in concert. The stylistically diverse riffs of guitarist Tim Collins incorporate everything from jazz to flamenco, and his complex melodies interplay perfectly with the asymmetrical time signatures and polyrhythmic percussion of ace drummer Chris Collins. Forming the backbone of their intricate sound is bassist and singer Henry Tremain, whose unadorned playing and artful vocal melodies make the band's songs soar. All three are virtuosic players and performers, and seeing them execute complicated yet catchy favorites like "Sponkulus Nodge" and "Coconut Crab" is a serious treat for fans that appreciate powerful musicianship.

TTNG got its start in Oxford, England in 2004 as This Town Needs Guns, a four-piece featuring Tim Collins on guitar and Stuart Smith on guitar/vocals. The pair's unique guitar interplay defined the band's early releases, which included a handful of EPs and their 2008 debut album Animals. Smith left the group in 2011 to start a family and singer/bassist Chris Collins stepped in to replace him shortly after, making his debut on the band's 2013 sophomore album 13.0.0.0.0. Along with the release the band changed their name to TTNG, a move intended to both reflect the new lineup and distance them from any associations with gun violence. They've been in peak form ever since, impressing with their masterful performances on tour and setting high hopes for their 2016 album Disappointment Island.