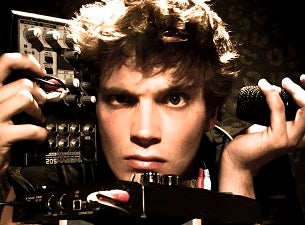 With microphone in hand, Australian beat box artist Tom Thum has the world at his lips. Using his throat, mouth and even his nose, Thum is a one-man sound machine who will thrill kids, teens and adults alike with his all-engaging show.

This vocal genius can create a whole ‘50s jazz band, the backing beat for famous hip-hop artists or produce traditional sounds from around the globe, including India, China, Germany and his homeland (the didgeridoo). He also has a fine singing voice.

Only in his mid-twenties, Thum has been in winning team battles at the World Beatbox Championships, has performed on Broadway in New York and shared the stage with hip-hop legends Grandmaster Flash.

A review by The Guardian (UK) says: “Tom Thum appears to have swallowed an entire orchestra and several backing singers.”