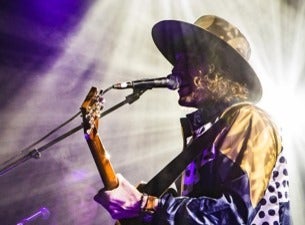 Thomas Oliver is a Wellington based singer-songwriter, internationally recognized as one of the world’s leading players of the Weissenborn lap-steel guitar.

Thomas released the world's first full-length, all instrumental, all Weissenborn album in 2013, titled Beneath The Weissenborn. The album debuted at #6 on the NZ charts, received 5 star reviews with sold out shows across the nation.

With over two million views on his YouTube channel, Thomas has developed an international audience from his home base in New Zealand, and has performed throughout New Zealand, Australia, Europe and Vietnam, and has toured and shared the stage with such legends as Joe Cocker, Eric Clapton and Fat Freddy's Drop.

Floating In The Darkness is a deep and raw, reflective body of work, largely self-produced, written and mixed by Thomas himself, with an additional soul-stirring collaboration with renowned producer and composer, Rhian Sheehan ("Let It Be This One"), input from Grammy Award-winning mix engineer, Trina Shoemaker, and mastering by Vlado Meller. As a result, he sees the songs on Floating In The Darkness as an intimate and honest reflection of himself: "a product of a whole lot of searching for the magic zone."

"He joins Leo Kotke, Ry Cooder and Michael Hedges as someone who has made buying a guitar album a must." - Stuff