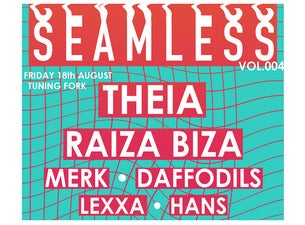 Capturing the attention of the pop world with her break-out smash hit, ‘Roam,’ Christchurch singer-songwriter Theia is an exciting new artist on the rise. Blending an ethereal glitter-pop sound with hints of electronic and RnB, her recently released self-titled EP debuted at number 3 on the NZ album charts.

Fresh from touring alongside New Zealand heavyweights Broods, Kings and Australia’s Kite String Tangle, and her own nationwide headlining tour, don’t miss your chance to catch Theia, who has been labelled by many as ‘kiwi pop music’s next big thing.’

Hamilton based Rwandan rapper Raiza Biza’s smooth baritone and contemplative storytelling blurs into the jazz, soul tinged beats he favours. Over four street albums and a relentless touring schedule, Raiza and his AmmoNation collective have entertained audiences as far afield as Australia and Europe. Taking things to the next level on the Seamless stage feels inevitable!

Merk is the project of Auckland producer and wonder-kid, Mark Perkins. His brightly-lit and homespun tunes are written, produced, performed, recorded, and mixed by Merk in a dark basement below the city. With his songs now out in the daylight, Merk has received a Taite Music Award for Best Independent Debut for his album 'Swordfish, travelled to Montreal for the Red Bull Music Academy in 2016 and recently returned home from touring Europe.

Meanwhile, fellow Aucklanders Daffodils have been busy building their 80s pop/new-wave influenced sound since taking out second place in the national final of the 2016 Smokefree Rockquest. Gaining a reputation for energetic performances and strong anthemic songs, driven by a tight rhythm section and soaring vocals, this young band promise to bring a fun-filled set, not to be missed.

Originally hailing from the far-north, .hans. is a young hip-hop artist who has been brewing his craft in the local underground scene for the last few years. This energetic rapper has been carving an audience for himself on stage and with the release of the 1995 tape in January this year..

LEXXA is a newly formed synth-pop duo made up of twin sisters, Maude and Julia Morris. After a year of living apart, they’ve come together over the last few months to co-write and fuse their contrasting solo musical styles. The result is a cloud of striking, melancholic dream pop.

Limited capacity means Seamless vol.4 is a hot ticket for August. Don’t miss your chance to catch this diverse line up of young kiwi talent!  Previous Seamless events headlined by MAALA and Drax Project were sell-outs and the event has a growing reputation as the place to see the best new acts on the rise.

All ages welcome + the bar will be open to over 18s.