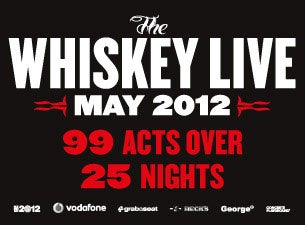 About THE WHISKEY LIVE

The 11th annual NZ Music Month festivities are fast approaching and The Whiskey, still buzzing from the success of its 2010 series is boasting an even bigger line up of Kiwi talent to whet even the most discerning music lover's appetite.

Opening the series on Tuesday 3 May is The Peter Urlich Sextet; Urlich has been a vibrant, paid-up member of the NZ music scene for over 30 years and he shows no signs of stopping.

Closing the series on Saturday 28th May is another who has paid homage to three plus decades in the industry, the man who holds more APRA song-writing awards than any other artist; Mr Dave Dobbyn, performing with his band plus opening support from members of Christchurch based band, Dukes.

The Whiskey bar owner, Andrew Bruce is thrilled with the 2011 line-up:

"The Whiskey has been involved in NZ Music Month for three years now and for us it gets bigger and better every year; it's a unique opportunity to see NZ music in a local and intimate setting - we only sell 80 tickets per show, people love it!."
Advertisement