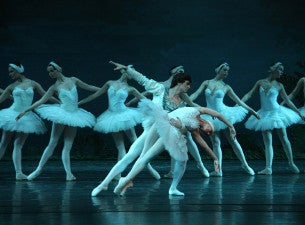 About The Russian National Ballet

The Russian National Ballet Theatre was founded with support of the Ministry of Culture of the Russian Federation. The basis for the creation of the theatre was necessity of promising young theatre with high creative potential, both the classical and contemporary. For aim and objective serves motto: "The talent and dedication to service to art".

With the instantly recognizable music of Tchaikovsky virtually a signature of classical ballet and the wonderfully dark story of good set against evil, Swan Lake is one of the most famous and loved of all works in the repertory. It is impossible to imagine the ballet world without it. The production by Evgeny Amosov for The Russian National Ballet Theatre is an especially appealing and popular one.

The glamour of the palace ballroom is evocative of the Russian Imperial world in which the ballet was created, while the haunting moonlit lakeside is perfect for the tragic conflict of the human and spirit worlds. The central role of Odette/Odile is one of the most testing for any ballerina especially in portraying both the vulnerability of Odette the white swan and the predatory duplicity of Odile the black swan.

Not surprisingly, the two great pas de deux of Acts II and III are anticipated highlights of every performance. Without question, this is one of the finest works of all ballet and one of the most loved and appreciated in the entire Russian National Ballet Theatre repertory.

Artistic director of the theatre is honored artist of Russia Evgeny Amosov. The coach of the company is Evgenya Rytova. The basic principle of the theatre is to preserve the creative heritage of the great masters of Russian ballet and to search for new forms in choreography.

The Sleeping Beauty has a special place in the The Russian National Ballet Theatre’s repertoire.One of the most lavish theatrical events of all time, the original St Petersburg staging of The Sleeping Beauty in 1890 was a spectacular illustration of the Russian Imperial style at its zenith. Today it remains the cornerstone of The Russian National Ballet Theatre’s repertory.

The current staging is directed by Evgeny Amosov. With its huge cast, fairytale settings and glorious Tchaikovsky score The Sleeping Beauty remains the very essence of classical grandeur. This version has all the elements of an enduring fairy tale: romance, poetry, fate, goodness versus evil, and of course, love! Don't miss this premiere production!

In a magic kingdom, a princess named Aurora was born. The evil fairy Carabosse cast a curse on the princess that she would prick her finger on her 16th birthday and die. When the princess' birthday came, true to the curse, it happened. The kingdom's good fairy, the Lilac Fairy, came to the rescue just on time, but she could only make the princess fall into a deep sleep instead. She also cast the same spell on the whole kingdom to protect them. A hundred years later, Prince Désiré passed through the dark forest, hunting with his friends. The Lilac Fairy found the prince and she set out to break the wicked spell by Carabosse.

In recent years, the company has repeatedly visited on tours many countries such as USA, China, Italy, France, Belgium, Spain, Portugal, Guatemala, Poland, South Korea and Japan. Nowadays, The Russian National Ballet Theatre land ceremoniously in over 15 cities in New Zealand and more than 30 cities in Australia. They will enthrall audiences in a greatest classical ballet journey.