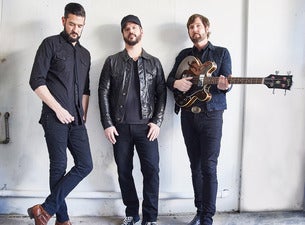 About The Record Company

THE RECORD COMPANY IN CONCERT:

LA-based blues rock outfit The Record Company has opened for everyone from B.B. King and Buddy Guy to Social Distortion and Grace Potter, but the band's acclaimed 2016 debut album Give It Back To You made clear what their loyal fans already knew: these guys were born to headline. Since the record's release the talented trio has topped Billboard's Adult Alternative Songs chart with their single "Off the Ground" and wowed on their first headlining tour with no-nonsense sets that put their impressive rock chops front and center. In concert they combine twangy slide guitar and driving distorted bass with elemental drumming that gives their songs serious rhythmic heft. Their palette is minimal, but it's the perfect foundation for singer and multi-instrumentalist Chris Vos, whose soulful voice and self-aware lyrics imbue the band's tunes with arresting emotional complexity. In the wake of their acclaimed debut The Record Company has wind in their sails, and fans can't help but get caught up in the excitement any time they kick out their bluesy brand of rock and roll.

The Record Company formed in Los Angeles in 2011 and spent their early days writing and recording in the living room of bassist Alex Stiff. They self-released a few 7" singles and an EP of covers in 2012, including a version of The O'Jays' "Love Train" that was featured in a Coors Light commercial. TV placements on shows like USA's Suits and CBS's CSI: Crime Scene Investigation followed, and by 2014 they were performing at major festivals across the country and touring in support of legends like Brian Setzer and Trombone Shorty. Following a 2015 European tour in support of Blackberry Smoke, The Record Company made their full-length album debut with Give It Back To You. The record was a critical and commercial success, spawning the hit single "Off the Ground" and drumming up major excitement for their first headlining tour.