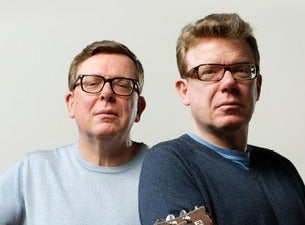 The Proclaimers announce NZ shows for May 2019

Popular visitors to Kiwi shores  - Scotland’s The Proclaimers – will perform their most comprehensive New Zealand tour to date, in May 2019.

Twins Craig and Charlie Reid and their talented band bring their fantastic live set to Auckland and Wellington.

Fans can look forward to hits like I’m Gonna Be (500 Miles), I'm On My Way, Sunshine on Leith, Letter From America and King Of The Road; as well as material from their acclaimed new album Angry Cyclist.

New Zealand singer-songwriter Mel Parsons will open all eight shows. Mel is currently celebrating the release of her new single I Got The Lonely, recorded in the US with award-winning producer Mitchell Froom (Crowded House, Elvis Costello, Paul McCartney).

Strikingly individual, The Proclaimers’ Reid twins have enjoyed huge success across the globe as the emotional honesty, political fire, wit and sing-along raucousness.

They have uniquely carved out a niche for themselves in the netherworld where pop, folk, new wave and punk collide. In the process, they have enjoyed Gold and Platinum records in UK, USA, Canada, Australia and New Zealand; and their strong loyal following continues to generate Sold Out signs at venues worldwide.