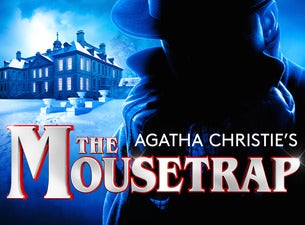 The West End’s legendary murder mystery drama THE MOUSETRAP is the longest-running show, of any kind, in the world, and is now in its 66th incredible year.  Written by the best-selling novelist of all time (Miss Marple, Poirot) and the ‘Queen of Crime’, Dame Agatha Christie, THE MOUSETRAP has kept audiences guessing for six decades.

Now the international production of this whodunit masterpiece comes to New Zealand.

Newly opened guesthouse, Monkswell Manor, is snowed in and amongst the seemingly ordinary gathering of guests, a killer lurks... Having already killed once, the murderer strikes again.

The tension is razor sharp: everyone is a suspect; everyone a potential victim. One by one the characters reveal their pasts, and a complex web of deceit and suspicion emerges. But who will be next, and who is the killer?

ASB WATERFRONT THEATRE FROM 2 APRIL
OPERA HOUSE FROM 8 MAY