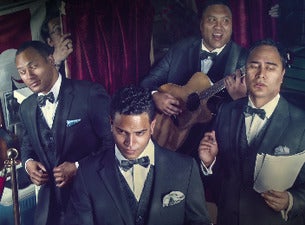 About The Modern Maori Quartet

Following a month in Edinburgh, Kiwi crooners Modern Māori Quartet return for a national tour with their debut album “That’s Us!”. Taking in some of the finest halls and theatres Aotearoa has on offer, the Quartet are guaranteed to entertain with their signature blend of off-beat comedy, stage routines and an array of original songs, New Zealand classics and traditional waiata.

Annie Crummer, local superstar and Pacific Music Awards “Lifetime Achievement” recipient, will be joining the boys on tour, as will frequent MMQ collaborator Awhimai Fraser, making this a Kiwiana show not to be missed.

“… the new face of Maori showbands, handsome, hilarious and harmonious ... entertainment at its best” – Theatreview