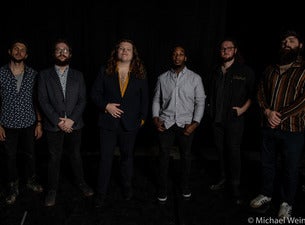 About The Marcus King Band

The Marcus King Band on Tour

If both Gregg and Duane Allman were reincarnated into the body of one musician, it's easy to imagine that lucky soul might be Marcus King. Though he and his band aren't derivative of the Allman Brothers Band at all, King possesses the raw-throated soulfulness and blisteringly bluesy guitar firepower that made Gregg and Duane, respectively, icons of the Southern blues-rock realm. The South Carolina singer/guitarist doesn't engage in onstage histrionics, he just puts his nose to the grindstone and gets down to business, delivering a gritty but precise blend of blues, rock 'n' roll and soul. The interaction between King and his bandmates is a crucial element of the Marcus King Band's in-concert appeal, as the bandleader tosses the spotlight around between bass, brass, keys and drums. And everybody maintains a supple, soul-drenched approach to jamming that's both organic and electrifying.

The Marcus King Band in Concert

Blues-rocking bandleader Marcus King comes by his gifts naturally — he's the son of the lightning-fingered singer/guitarist Marvin King, and Marcus started showing his talent early on. By the time he came of age, he was already gaining a rep for his six-string prowess, and he earned the support of no less esteemed a talent than Gov't Mule/Allman Brothers Band guitar hero Warren Haynes. Haynes signed The Marcus King Band to his own Evil Teen label for the group's 2015 debut album, Soul Insight, and the record busted into the upper rungs of the blues charts. Of course, the band's sound always encompassed more than blues, and word quickly spread about them in the rock world, especially after the legendary Fantasy label released the MKB's second, self-titled LP in 2016. And when cutting-edge country producer Dave Cobb lent his touch to the band's third album, 2018's Carolina Confessions, a broader view of The Marcus King Band's rootsy approach came into view.