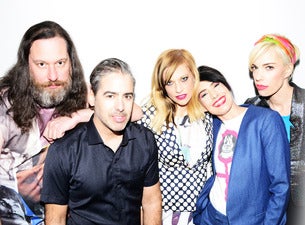 About The Julie Ruin

THE JULIE RUIN IN CONCERT:

With a sound that falls between arty punk and grungy pop, The Julie Ruin have been treating fans to fun-loving shows bursting with raw energy ever since they started rocking Brooklyn venues in 2010. Frontwoman and original riot grrrl Kathleen Hanna has always captivated audiences by snarling her opinionated anthems over the charging beat. The rest of the group pumps up fans with everything from disco synths to distorted power chords, driving the excitement level into the red on favorites like "Oh Come On", "Girls Like Us", and "I Decide". The high-energy, pure-fun approach of The Julie Ruin leaves a lasting impact on ticket buyers, who get swept up in the untamed energy these enthusiastic punk rockers bring to the stage.

Kathleen Hanna first took an interest in feminism at the age of nine when her mother took her to see feminist activist Gloria Steinem speak. When her group Bikini Kill released their 1994 debut album Pussy Whipped, Hanna became an icon in her own right by fusing feminist lyrics with punk music. The riot grrrl pioneers amicably parted ways in 1998, giving Hanna the time to self-record and release a solo album under the pseudonym Julie Ruin. She next found success by fusing electroclash and LGBT activism in the band Le Tigre, though she was forced to leave the group in 2005 due to health issues. After her recovery Hanna revisited her solo project and formed a full band ñ The Julie Ruin. The quintet impressed audiences and critics right out of the gates with the garage rock sound of their 2013 debut Run Fast. With their sophomore album Hit Reset and a North American tour generating buzz 2016, The Julie Ruin have fans eager to witness their raw sound and unyielding energy in concert.