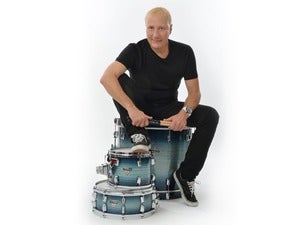 About The Jazz Gala

One of Bissonette's first recordings is Brandon Field's The Other Side of the Story in 1985.[1] It featured David Garfield on keyboards. A few years later Bissonette would start playing shows with Field, Garfield and Steve Lukather on guitar and with John Peña on bass as Los Lobotomys. These shows took place at the Baked Potato, a jazz club and restaurant in Los Angeles, California, playing rock, Latin, jazz and more.

From 1985-1992, Bissonnette served as the drummer for former Van Halen frontman David Lee Roth, notably appearing on the "Eat 'Em And Smile" and "Skyscraper" albums and tours.

In 1990 and 1993, Bissonette released drum videos Private Lesson[2] and Playing, Reading & Soloing with a Band,[3][4] respectively. Private Lessoncovers a variety of topics including double bass drumming, rudiments (featuring a backsticking technique from the snare drum solo Tornado[5] by Mitch Markovich), playing with a metronome, brushes, and more.

In late 1995, Toto was beginning their Tambu tour when new drummer Simon Phillips developed back problems. Phillips asked Bissonette to fill in for him during the tour's first leg.

In 2017, Bissonette recorded on the album La La Land by Daniel Glen Timms.[7]

Louis Dowdeswell – UK Trumpet Artist first caught the ear of the jazz / big band audience through his YouTube channel has amassed more than 3.5 millions views and is the most popular big band channel on the site. Since then Louis has performed with artists such as Al Jarreau, Michael Buble, Gordon Goodwin’s Big Phat Band, Sheridan Smith, Peter Andre, Hamish Stuart, Josh Groban, Seal, Alfie Bowe, Michael Ball, Brendan Cole, and many more. His TV credits involve playing on the X Factor as part of the big band, Tonight at the Palladium, Michael Buble at the BBC and Children in Need, to name a few. Orchestras he has been involved with, include the Royal Philharmonic Concert Orchestra, English National Orchestra, and the English Session Orchestra.

Glenn Walters: Vocalist from San Francisco is long respected as a “musician’s singer” and workhorse of the ad-jingle industry in San Francisco. Former lead – singer with the The Hoodoo ERhythm Devils and The Zasu Pitts Memorial Orchestra is showcased on several CD’s. As performs with the Ray Charles Project and has recorded on a CD produced by Doc Kupka baritone saxophone player from the famed band Tower of Power.

In concert with the Rodger Fox Big Band.