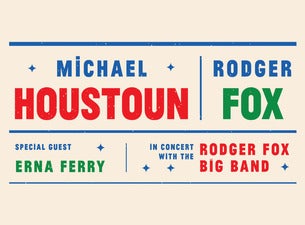 You won’t find Vannelli next to van Beethoven in an alphabetical order of immortal composers but you should. New Zealand’s foremost classical pianist, Michael Houstoun loves him.

“I love the tunes, the harmonies, the driving rhythms, the jazz-rock feel,” Houstoun says.

So much so, that Michael Houstoun, jazz impresario, Rodger Fox, and the Rodger Fox Big Band (RFBB) are presenting a world premiere of Vannelli music in Palmerston North next month.

While Fox and Houstoun have both performed before, the world premiere makes this series very different and special. Instead of playing jazz adaptations of classical pieces, Michael will present two of Gino’s most enduring numbers, especially written for him.

“Vannelli is sophisticated and catchy at the same time, he makes most pop-rock look like it’s not trying,” Houstoun says. “Bill’s arrangements are pure pleasure. He is a jazz genius. He’s created something new with his arrangements without any betrayal of the original Vannelli inspiration.”

Vannelli is very accessible and Houstoun advises the audience to “sit back and listen to us play. They’ll have a happy time.”

The Globe concert also includes Warriors, a Bill Cunliffe original. Michael will play Warriors and feature on piano in a rhythm/vocal version of Charles Trenet’s I Wish You Love, sung by supremo blues vocalist, Erna Ferry.

Erna will also present an awesome version of Mike Farrell’s Carry My Blues Away which can be found on the RFBB New York recording “You Gotta Know”, a stella version of George Gershwin’s Summertime and a mash-up of two tunes, Lee Morgan’s Sidewinder & The Beatles I Feel Fine.

The Big Band’s contribution is material from the American modern big band library..

The Fox/Houstoun friendship is recent, one that’s only flourished in the last decade.
Michael regards Rodger as “my great friend and I admire him as I admire few others.”

“His commitment to jazz, his indefatigable engagement with it on every level makes him invaluable in New Zealand. He’s a fabulous musician and a wildman on the trombone. And he has excellent taste in friends and collaborators.”

The friendship has also seen Michael move from an impressive classical career into jazz, a challenge he’s achieved. He reflects on when he first played with Rodger and the band and “had to find my way into a comfortable relationship with the rhythm section.”

“Now I know a lot more about jazz drumming in particular than I knew then.”