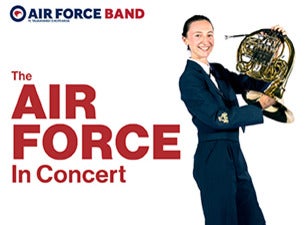 The Air Force In Concert Tickets

About The Air Force In Concert

The Air Force in Concert is the Royal New Zealand Air Force Band’s biggest event of the year. On Sunday October 3 at 2:30pm, the band will perform symphonic masterworks, jazz standards, and musical theatre hits. This year’s show will highlight local talent, including vocalists Matt Mulholland and Leading Aircraftman Stephanie Paris, and resident bagpiper Flight Sergeant Murray Mansfield. The band will show its versatility, performing as a jazz orchestra, a drumline, as well as a full symphonic band.

Undertaking their core duties, the RNZAF Band can be heard welcoming visiting dignitaries at Government House, or providing music for commemorations at Pukeahu National War Memorial Park. In February 2021, they completed a week-long South Island tour, performing to more than 4000 adoring fans. More recently, they have also been present at numerous musical and ceremonial events in Wellington, including CubaDupa, the National Commemoration Services for Anzac Day, and the memorial service for HRH the Duke of Edinburgh.

“We’re greatly looking forward to performing for our home crowd after not being able to present this concert in 2020. The band is sounding excellent, and we can’t wait to share a wide range of musical delights with the audience.” Director of Music Flight Lieutenant David Gallaher

Get in fast to experience the country’s largest professional symphonic band in the heart of Wellington!