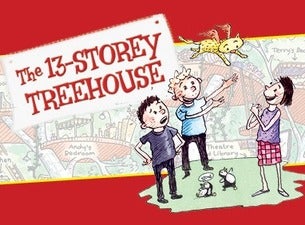 About The 13-Storey Treehouse

Who wouldn’t want to live in a treehouse? Especially a 13-Storey Treehouse that has everything, including a bowling alley, a secret underground laboratory, a vegetable vaporiser and a marshmallow machine that shoots marshmallows into your mouth whenever you're hungry.

Yes that’s right. The best-selling book has been turned into an equally brilliant show for the theatre. And you’re invited!

Today, Andy and Terry’s first play opens – except that they forgot to write it. Where will they find flying cats, an invasion of monkeys, and a giant gorilla? Luckily they have lots of props and costumes and some very impressive stage technology.

Just remember to USE YOUR IMAGINATION!

Direct from its sell-out premiere season at the Sydney Opera House this amazing adaptation is from award-winning playwright and author Richard Tulloch (The Book of Everything, Bananas in Pyjamas). Prepare yourself for pure theatrical wizardry in this nutty adventure based on the bestselling book from the New York Times bestseller and Children's Choice winner Andy Griffiths.

A play by Richard Tulloch, adapted from the multi-award winning book by Andy Griffiths and Terry Denton. Directed by Julian Louis.