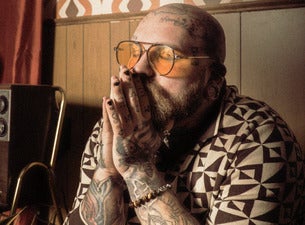 Frontier Touring are delighted to welcome one of the hottest rising names in American music, Teddy Swims, to Australia and New Zealand for the very first time in September 2022 – the Atlanta, Georgia singer is set to perform four special headline shows in Melbourne, Brisbane, Sydney and Auckland with his electric live band, Freak Freely. ‘There is no doubt in my mind that Swims will emerge as one of the most important voices of this decade and beyond.’ – The Hype Magazine ‘Artist You Need To Know’ – Rolling Stone ‘Outrageously talented’ – James Cordon Famous for his rich baritone, plentiful tattoos, and genre-crossing chameleon sound, Teddy (real name Jaten Dimsdale) has a following of millions, the singer just wrapping a sold-out, 33-date US tour this week, with a 20-date European leg this month. The numbers speak for themselves: 450 million+ streams globally, over 400 million YouTube views, fans spread right across the globe.

Teddy Swims’ sound defies categorisation, but it sure puts a smile on your face: from soul to funk, gospel to country to R&B, it all comes back to that incredible voice. You can hear it on his just-released, retro Motown-vibed new single ‘dose’, or the viral hit ‘911’, the epic ‘Bed On Fire’ (viewed over 30 million times on TikTok), his country crossover hit ‘Broke’ (ft. Grammy nominated superstar Thomas Rhett), tracks such as ‘Love For A Minute’, and many more. In the US, major TV hosts Ellen DeGeneres (watch here), James Corden (here) and Stephen Colbert (here) have showcased his talents, while the 29-year-old also counts famous names such as will.i.am, Nelly, Tim McGraw and Shania Twain as fans. Teddy’s 2020 cover of Twain’s ‘Still The One’ alone has earned a staggering 84 million views. The grandson of a Pentecostal preacher, Teddy grew up inspired by Al Green and playing football, performing in metal, punk, and hip-hop outfits as a teen.

In 2019 while living in Texas, encouraged by his father he started posting covers on YouTube. From Marvin Gaye, The Weeknd, Amy Winehouse, Billie Eilish and more, they were soon watched by millions, Swims’ later signing to Warner Music in 2020. 2021’s Tough Love EP immediately landed him on playlists, including Spotify’s New Music Friday, Retro Pop and Just Good Music, Amazon’s Platinum Pop and Fresh Pop, plus highlights on Tidal, Apple Music, and Pandora. Today, Swims’ fast-rising trajectory is a result of his glorious energy, unbeatable hooks and spirit – watch him talk music and life in a recent chat with Heavily Inked here.

Guaranteed to have you dancing, this is one live performance music lovers won’t soon forget! With a cracking live band behind him and Teddy’s soaring voice, these special theatre shows are just the beginning of what’s to come down under... don’t miss Teddy Swims, performing live on stage this September