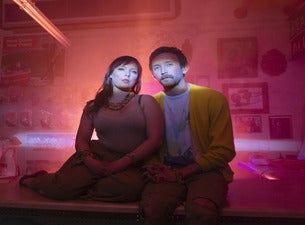 In concert it's hard to decide which member of electro pop duo Sylvan Esso is more entrancing. Is it singer Amelia Meath, who gyrates and fist pumps on stage while letting her gorgeous voice roam free? Or is it producer Nick Sanborn, who's all smiles and sweet intensity as he demonstrates his wizardry behind a laptop? Luckily for concertgoers, the answer is both. The dynamic duo performs crowd favorites like "Coffee" and "Hey Mami" with impressive skill as Sanborn layers Meath's stunning soprano over thumping bass and intricate live looping. Even more amazing is their undeniable chemistry on stage -- you can practically see them sharing the same wavelength and seamlessly syncing their creativity. With joyous energy and feel-good vibes that encourage concertgoers to let loose, Sylvan Esso is a must-see live act that ticket buyers will be raving about for years.

Electro pop duo Sylvan Esso came together by chance while both members were part of other bands -- singer Amelia Meath with a cappella folk group Magic Mountain, and producer Nick Sanborn as one-third of psych-rock collective Megafaun. They met in 2012 when both groups were on the same club bill in Milwaukee, and the pair made their first steps toward collaboration when Meath asked Sanborn to remix a Mountain Man track. The following year they moved to Durham, North Carolina, where they recorded their self-titled debut album. With standout tracks like "Coffee" and "Play it Right", the album was critically acclaimed and they soon found themselves sharing the stage with indie heavyweights like Feist and Deer Tick and touring alongside Tune-Yards and Foster The People. As one of indie rock's most buzzworthy new bands, Sylvan Esso has ticket buyers chomping at the bit to catch them live in concert.