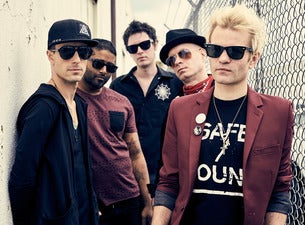 Two-time Juno Award winners Sum 41 rode the crest of the nu-metal wave in the early 2000s with a catchy blend of punk, rap and metal elements woven into their music. They were able to pinpoint some of the most infectious characteristics of popular genres and meld them into a hybrid that won them throngs of fans who were eager for more. Tickets to their concerts traditionally sell out fast, as fans don't want to miss the chance to jump up with the band and request songs through the extra microphone that seems to just float around the stage. The band orchestrates this circus-like scenario night after night on tour and even indulges in a cover or two by Judas Priest or Iron Maiden —complete with drum solos. Incidentally, the band was lucky enough to borrow drummer Tommy Lee from Motley Crue for a stretch between 2001 and 2003. Their August 2011 release Sum 41 Live at the House of Blues boasts plenty of live concert antics and features the hit songs "Underclass Hero," "Motivation" and "Fat Lip."

The band hails from Ajax, Ontario, Canada and is fronted by lead singer, rhythm guitarist and primary songwriter Deryck Whibley. They began in 1996 as a NOFX cover band called Kaspir but eventually changed their name for a high-profile show opening for Supernova. They signed an international record deal with Island Records in 1999, which resulted in their 2001 debut release All Killer, No Filler. They embarked on a relentless journey of touring and songwriting that led to the 2002 release of Does This Look Infected?, 2004's Chuck, 2007's Underclass Hero and the 2011 release Screaming Bloody Murder, with subsequent tours. Sum 41 continues this tradition with a string of Canadian tour dates scheduled for the spring of 2014.

Sum 41 is touring on the Rockstar Energy Drink DISRUPT Festival in 2019. The touring festival features unique lineups in each city, including The Used, Thrice, Circa Survive, Sum 41, The Story So Far, Atreyu, Sleeping With Sirens, Andy Black, and more.