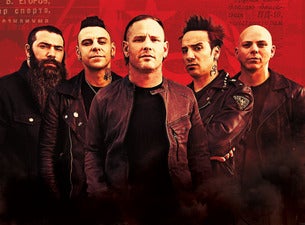 Fronted by the charismatic Corey Taylor (Slipknot), the band has sold more than four million albums worldwide over the course of five full-length releases. New Zealand audiences last witnessed the raw power of a Stone Sour live show in 2013 when the band played with Linkin Park.

Tickets go on sale at midday Wednesday, May 17.

My Live Nation members may access tickets first during the exclusive pre-sale beginning at 11am Monday, May 15.

Stone Sour unleashed their eponymous debut album in 2002 and was immediately confirmed as one of the most popular and significant hard rock outfits of the 21st Century. Stone Sour earned RIAA gold certification while singles “Get Inside” and “Inhale” each received GRAMMY® Award nominations for “Best Metal Performance.”

Come What(ever) May followed in 2006 and proved an even greater accomplishment with a Top 5 debut on the SoundScan/Billboard 200 and a #1 entry onto Billboard’s Rock Albums Chart. The acclaimed album spawned still another GRAMMY®-nominated single in “30/30-150”. Stone Sour’s most recent all-original releases, the monumental House of Gold & Bones – Part 1 and House of Gold & Bones – Part 2 both made Top 10 debuts on the SoundScan/Billboard 200 upon their 2012 and 2013 arrivals.

After releasing an EP in 2015, Straight Outta Burbank, the band headed back to the studio to record, Hydrograd. Recorded at Sphere Studios in North Hollywood, CA with producer Jay Ruston, Hydrograd features the lead tracks “Fabuless” and “Song #3”. “Fabuless” is joined by an official music video, directed by Paul Brown, which is streaming now on Stone Sour’s official YouTube channel. The album will be released worldwide on June 30.

Known far and wide as a truly incendiary live act, Stone Sour has built an international fan following through countless headline tours, multi-artist caravans, and performances at such famed festivals as Rock In Rio and the UK’s Download Festival.

TICKETS ON SALE MIDDAY WEDNESDAY MAY 17