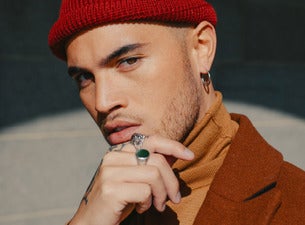 Hitting massive centres on his regional tour this September, Stan will take the stage this to perform songs from his impressive catalogue plus his brand new pop smash single ‘Give’ (co-written by Matiu Walters of SIX60) for his beloved fans!

Over the course of his career Stan Walker has released five studio albums and appeared in five motion pictures post his TV debut in 2009 as winner of the seventh and last season of Australian Idol. No stranger to kiwi television viewers, Stan was also a much loved host of the first two seasons of The X Factor NZ!

Returning to Stan’s first love of making music, New Zealand audiences can expect to hear some of his biggest hits including ‘Black Box’, ‘Unbroken’, ‘Take It Easy’, ‘Bulletproof’, latest single ‘Give’ and much, much more…

Fijian born and Auckland based artist Lepani has just released his debut track ‘Pocket Full of Love’. Not only did Lepani write and record the track, he also produced, mixed and performed all the instruments himself! The track peaked at #5 on the Hot NZ Single Chart and with more music in the pipeline, Lepani will sure be one to watch!

Niko Walters has been quietly waiting in the wings for his moment to share his music with the world.  While he may be the brother of SIX60 front-man Matiu Walters, Niko pulls no punches in commanding the spotlight with his new tracks ‘Together’ and ‘Moving On’. With more music lined up for release, ‘Together’ and ‘Moving On’ give an early taste of the intoxicating talents fans will come to expect from Niko Walters.

Hailing from Avondale, West Auckland, R&B singer and songwriter Jordan Gavet spent her youth between Auckland and Sydney listening to the sounds of contemporary R&B artists while crafting her own unique style. Her voice is sublime and her songs filled with attitude. Stay tuned to hear Jordan’s debut single coming soon.

Joining Stan on stage will be his longstanding band The Levites. Consisting of the Nansen brothers, brothers – Jakes (keys), Ross (drums), Junior (bass) and Inoke Finau on guitar, they are widely regarded as New Zealand’s hottest session band. With buckets of soul and funk for days, The Levites will be sure to get you grooving this September!