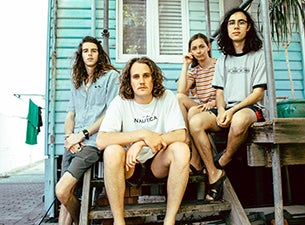 SPACEY JANE make irresistible pop-rock jams. The Fremantle locals, or Freo as the locals call it, have confirmed their return to New Zealand this March. After selling out their last Auckland show in December, the foursome will play the Tuning Fork on Tuesday, March 10 before heading south to play Meow in Wellington on Wednesday, March 11.

As most bands do, Caleb, Kieran, Ashton and Peppa came together through blooming friendships and lucky connections. A few jams later, the bond was cemented and their debut gig in Caleb's dad's backyard kicked it all off. And in almost the blink of an eye, Spacey Jane has graduated from suburban backyards to opening for bands such as Car Seat Headrest, Alex Lahey, British India and the Jungle Giants. Plus some screaming festival sets at WaveRock, Gizzfest, Falls Festival and and as of last weekend in Australia, Laneway Festival 2020.