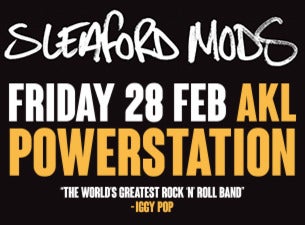 Tickets Onsale This Thursday 24 October at 10am

Solid Entertainment are thrilled to announce that for the first time ever SLEAFORD MODS are coming to play in New Zealand.

A band on all right-thinking music fans must-see list. One of the most important, most written about, most authentic, most acclaimed, most divisive, and most utterly brilliant bands of the last decade. The Powerstation, Friday 28th February, 2020 – they’re yours!

SLEAFORD MODS are one of the most politically charged and thought-provoking bands in music today. Stumbling into the music scene in 2013 at a time of political and creative austerity, their breakthrough album ‘Austerity Dogs’ surprised many and caught the moment, spearheading a punk renaissance and paving the way for a generation of new artists. Five critically acclaimed albums later, Sleaford Mods find themselves lauded for exhilarating and brutally brilliant live shows and heralded as Iggy Pop’s favourite band; still paving the way for those who follow.

SLEAFORD MODS hail from Lincolnshire in England and are Jason Williamson (lyrics and vocals) and Andrew Fearn (music). They are a band like no other.

“Hands up who thinks Sleaford Mods are the best band in the world.
The rest of you are wrong.”  -Steve Albini

“A currently unrivalled feast for the mind.” Mojo

“Fierce yet killer funny, dense but never flabby, this is bile with mileage.”  - The Independent

“Biting humour and sharp observations of an uncomfortably recognisable contemporary Britain.” - The Observer

“Anger is still the foremost energy, but there is a much richer seam of humour than they like to let on. Their set is relentlessly powerful.”  - The Guardian