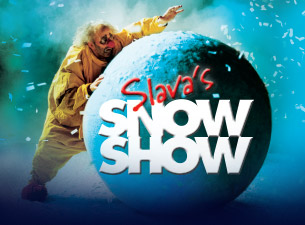 SLAVA’S SNOWSHOW is a breathtaking spectacle of beautifully crafted comic images, restoring childish wonder in people of all ages.

Following his sensational performance as part of Cirque du Soleil’s Alegria, Slava went on to create his own SLAVA’S SNOWSHOW which has become a multi award-winning international sensation, delighting and thrilling audiences in more than 80 cities around the world, from London’s West End to Sydney and from New York to Moscow.

SLAVA’S SNOWSHOW is a fusion of traditional and contemporary theatrical clowning arts. The show brilliantly creates a world of wonderment and fantasy that transports the audience to a joyous dream-like place, where a bed becomes a boat in a storm-tossed sea; a woman is wrapped in cellophane and becomes flowers in a vase; a child walks in amazement inside a bubble; Slava boards a train and then becomes the train, his chimney-pot hat billowing smoke; and a web of unspun cotton envelopes the audience.

The stunning finale sees a letter turn into snowflakes, and the flakes turn into a snowstorm, which whirls around the auditorium, leaving the audience ankle-deep in snow.

“ Magical work of wonder.  And a reminder that no one is ever too old to enjoy clowns.” EVENING STANDARD

“Simply thrilling.  It fills you with innocent amazement. It restores childish wonder in adults. After the show ends, nobody wants to leave the theatre.” THE DAILY MAIL, UK