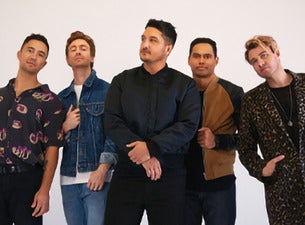 SIX60 made New Zealand history earlier this year when they sold out Western Springs Stadium at break-neck speed (over 50,000 tickets) proving them to be the highest ticket selling artist of all time!

“The last show at Western Springs was such a big moment for us. The love we felt at Western Springs Stadium was truly special, so there was no hesitation when the idea came up of doing it all over again. And this time, we want to go even bigger! We can’t wait”. - SIX60

The band also hold records for the combined album sales of 15 x platinum and selling over 1 million singles in New Zealand alone. They’ve also scored a total of five NZ Music Awards including Best Group in 2018 and sophomore album SIX60 (2) has spent an unbelievable 230 weeks in the NZ Top 40 Charts.

Already living up to its name, brand new single The Greatest is proving to be another smash hit. Of the song, the band say; “We initially drew inspiration for The Greatest upon seeing that iconic photo of Mohammed Ali with The Beatles, but it’s now taken on a life of its own. It’s important to us that we keep striving to be better, never stop aiming higher. We, as a nation always punch above our weight in so many ways, because of that self-belief and drive. We wanted to make a song that reflects that.”

OCEAN ALLEY – Hailing from Sydney’s Northern Beaches, six-piece Ocean Alley have solidified their position as one of Australia’s most exciting bands both at home and abroad. With two albums under their belt, Lost Tropics (2016) and the critically acclaimed Chiaroscuro (2018) which spawned the triple j Hottest 100 #1 and ARIA Top 10 Platinum certified single Confidence , the band have captivated audiences worldwide with their infectious blend of psychedelic surf-rock, selling out slews of shows wherever they play. They’ve also gone on to amass over 60 million catalogue streams, as well as attaining more than 1.4 million monthly Spotify listeners.

MITCH JAMES – With certified Gold album sales in NZ alone and over 94 million combined streams, Mitch James has been on the rise since his songs first hit the airwaves. Massive singles 21, Bright Blue Skies and Old News have cemented Mitch as a main-stayer of commercial radio and live touring. His highly anticipated forthcoming album is due for release later this year and was produced by Eli, Ji and Chris of SIX60.

CHURCH + AP – Rap duo Church + AP bring their party-inducing sounds to Western Springs including hip-hop anthem Ready Or Not which has just reached gold sales! With several killer tunes under their belts they’re sure to make some new fans.

SORAYA – Kiwi born music producer and DJ Soraya La Pread will provide the beats for our fresh new acts at the show.  Having been surrounded by iconic recording artists whilst growing up her feel and knowledge of music is cerebral. Now spending time between here and Los Angeles, Soraya’s career is rocketing upward.

PAIGE – From Auckland, singer-songwriter Paige has won the world over with her self-filmed DIY videos. She continues to build a huge online fanbase and recently released this track

VAYNE – Auckland based up and comer Vayne started making waves when her 2 demos on Soundcloud amassed more than 50,000 plays. Check out her single waitwait!